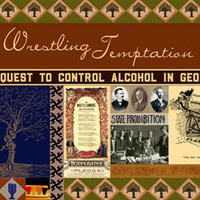 Exhibit: Wrestling Temptation: The Quest to Control Alcohol in Georgia

Wrestling Temptation: The Quest to Control Alcohol in Georgia traces the struggle that state leaders have faced in regulating the production, transportation and use of alcohol from 1733 to the present. The exhibit explores issues of morality, economy and personal liberty entwined with the use and abuse of alcohol. It considers what made Georgia different by paying close attention to the adoption of statewide prohibition in 1907 and the reluctance of state officials to repeal that measure even in the face waning public support and dire financial times during the 1930s. The display concludes with a reflection on modern times.