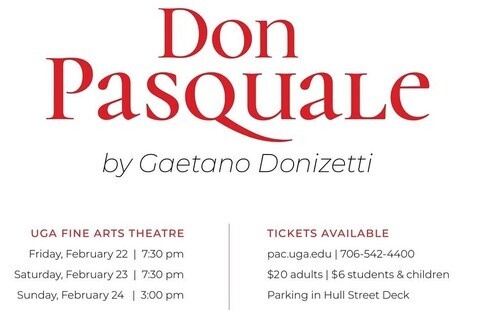 Fine Arts Building, Fine Arts Theatre View map $20, adults; $6, students
Add to calendar
Save to Google Calendar Save to iCal Save to Outlook

https://pac.uga.edu/event/uga-opera-theatre-2/2019-02-22/ ##thehugh
View map
Add to calendar
Save to Google Calendar Save to iCal Save to Outlook

The University of Georgia Opera Theatre, along with several esteemed guest artists, will be commanding the Fine Arts Theatre stage as they take on the beloved opera Don Pasquale by Gaetano Donizetti. The opera is set to run Friday, February 22nd and Saturday the 23rd at 7:30 and Sunday, February 24th at 3:00. Don Pasquale epitomizes Italian opera buffa, so audiences should come prepared to have a good laugh.

This production will be unique because it is set in the 1950s and not in the original time setting by Donizetti in the early 19th century. This opera comes out of the Bel Canto era of music, which focuses on beautiful singing foremost and gives the singers the opportunity to impress audiences with the highest level of vocal skills. Donizetti wrote a number of comedic operas based on life situations often around love triangles along competing relationships and disguised identities

The audience will have the opportunity to experience the work of several guest artists, including Don Pasquale performed by Stefano de Peppo, who recently appeared at the Atlanta Opera in leading roles. Joining the UGA Opera Theatre as well is guest stage director John Stephens who has performed the title role numerous times in opera companies throughout the USA. Returning as guest International conductor will be Maestro Hilary Griffiths from Cologne, Germany.