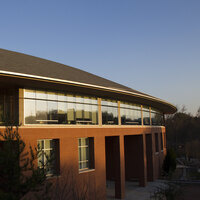 Turbulent Femme || toward a radical future, featuring the work of Dodd MFA candidate Alex McClay and California-based artist Sam Regal, is an immersive interdisciplinary exhibition that challenges visitors to navigate feminine selfhood through institutional noise, pseudo-authority, and contrarian confessionalism. The artists generated site-specific media-text, sculpture, projected image, and sound to create a complex navigable and contradictory space that asks where, among patriarchal systems and internet quasi-feminism, actual American women might find the means to exist.

McClay is a second year graduate student at the Lamar Dodd School of Art at the University of Georgia. She received her BFA in Photography and Sculpture from the University of Cincinnati in Ohio in 2014. She was a Core Fellow at Penland School of Craft in North Carolina from 2016-2018, where she studied printmaking, book arts and papermaking. Her current practice engages language, movement, and the body to question and disrupt the power dynamics present in our most intimate and vulnerable spaces. Her work has been included in multiple venues across the United States, including Weston Art Gallery (Cincinnati, OH), Lyndon House Arts Center (Athens GA), Haggerty Gallery (Dallas TX), Penland Gallery (Penland, NC), Robert C Williams Museum of Papermaking (Atlanta, GA), and Marcia Wood Gallery (Atlanta, GA).

Regal is a performer and writer of poetry, plays, and short fiction. Her translation of Yao Feng's One Love Only Until Death was published in 2017 by Vagabond Press, and her work has appeared in or is forthcoming from The Santa Ana River Review, Sum, The Wild World, NoD Magazine, and elsewhere. She has performed most notably with Jennifer Vanilla at MoMA PS1, Le Poisson Rouge, and Brooklyn Bazaar. Sam earned her MFA from Hunter College, where she was awarded the Colie Hoffman Prize in Poetry.