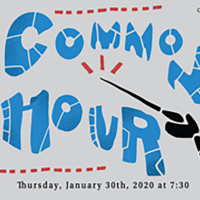 This Thursday Scholarship Series concert will feature a program by associate director of bands Jaclyn Hartenberger, “Common Hour,” inspired by her conducting classes.

The variety of music and collection of performers from across the music building makes the concert unique. The first half of the concert features works by Mozart, Debussy and Tchaikovsky. Professor and associate director of Research and Graduate Studies Adrian Childs created an adaptation of Mozart’s “Eine Kleine Nachtmusik” for chamber strings with Harmonie ensemble (2 oboes, 2 clarinets, 2 horns, and 2 bassoons), combining elements of the ‘orchestra’ and ‘band’ heard in Mozart's time. The Debussy piece is a chamber version created by Schoenberg including piano and harmonium, a small version of an organ. Finishing out the first half is a wind ensemble transcription by assistant professor Peter van Zandt Lane of the Tchaikovsky Violin Concerto featuring Shakhida Azimkhodjaeva on solo violin.

Those unable to make it to the concert can watch the live stream at music.uga.edu/live-streaming.