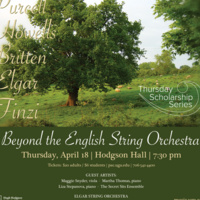 Violin professor Michael Heald will bring to the stage a program that takes the audience past what one would typically expect from an English String Orchestra concert. Heald will be leading the performance as concertmaster and will be joined by several faculty guests, as well as student and alumni performers.

This concert is presented as part of the Thursday Scholarship Series, which began in 1980. As the flagship concert series at the Hugh Hodgson School of Music, it continues the tradition of “Music Appreciation Programs” started by Hugh Hodgson himself in the 1930s. Proceeds from contributions and ticket sales to these concerts are among the primary means through which School of Music scholarship funds are raised each year.

The concert will be streamed at music.uga.edu/livestreaming.