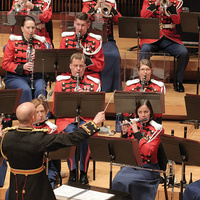 "The President's Own" U.S. Marine Band has canceled its upcoming tour in consideration of current conditions across the country. Their appearance at the UGA Performing Arts Center, scheduled for Oct. 25, will not take place and will not be rescheduled.

All other Performing Arts Center events in the 2021-22 season, which begins Oct. 5, are expected to take place under the University's Covid-19 protocols. For more information about the season and safety measures, click here.

As part of its 2021 national concert tour, the beloved U.S. Marine Band returns to Hodgson Concert Hall! The band is America’s oldest continuously active professional musical organization. Founded in 1798, the Marine Band has performed for every U.S. President since John Adams. Known as “The President’s Own” since the days of Thomas Jefferson, the band’s mission is to provide music for the President of the United States and the Commandant of the Marine Corps.

In the style of the band’s 17th Director John Philip Sousa, who initiated the concert tour tradition in 1891, Marine Band Director Colonel Jason K. Fettig will lead the ensemble in a diverse mix of music from traditional band repertoire and Sousa marches to instrumental solos and a salute to the Armed Forces.

This performance is free and open to the public. Free tickets are available (limit four per request) beginning August 23 on this web page or by calling or visiting the Performing Arts Center Box Office. General admission seating for the performance is on a first-come, first-served basis. Ticket holders must be seated by 7:15 p.m.  Ticket holders arriving after 7:15 p.m. will be admitted only if seats are still available. Large bags are not permitted.

Read about our COVID-19 protocols here.