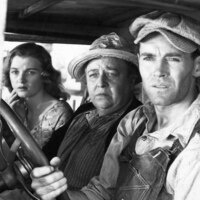 Film Screening: "The Grapes of Wrath"

Part of the 1930s America Film Series. Based on John Steinbeck’s novel of the same name, this 1940 film tells the story of the Joads, an Oklahoma family who migrate to California after losing their farm during the Great Depression. Widely considered one of the greatest American films of all time, this film won the Academy Award for Best Director and Best Actress in a Supporting Role. Directed by John Ford and starring Henry Fonda, Jane Darwell and John Carradine. 1940, NR, 129 min.