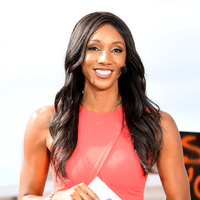 Speaker Maria Taylor is in her sixth season as an analyst, host and reporter for ESPN.

The Terry Leadership Speaker Series presented by the Institute for Leadership Advancement brings well-known leaders from a variety of organizations to share their unique leadership styles and experiences with students.

Maria Taylor is in her sixth season as an analyst, host and reporter for ESPN. A trailblazer in sports broadcasting, she has worked as a sideline reporter for programs such as ABC Saturday Night Football, helped launch the SEC Network and was the first black woman to co-host ESPN’s College GameDay Built by the Home Depot. She earned both her bachelor’s degree in broadcast news in 2009 and her MBA in 2013 from the University of Georgia.

In 2015, she co-founded The Winning Edge Leadership Academy, a nonprofit that provides educational, mentoring, networking and enrichment opportunities to ethnic minorities and women seeking careers in the sports industry.