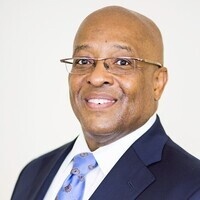 He began his career as a credit analyst and since then has held progressively responsible roles in two of the nation’s top financial institutions, Bank of America and Capital One. At Capital One, he was the Executive Vice President (EVP) for North America Branch Distribution (1,000 bank network)  and the Mid-Atlantic Market President (Washington, DC MSA).

Prior to Capital One, Jackson served in EVP leadership roles at Bank of America in several businesses, including Premier Banking & Investments, Home Lending and Retail & Business Banking. Also, he served as president of the Virginia Bank, where he led the state-wide transition from NationsBank to Bank of America.

Most recently, Jackson was the Sales EVP for Credit Services and Decision Analytics at Experian North America. He led the largest business to business (B2B) sales organization, representing ~50% of revenue in North America.  Also, he was responsible for leading sales transformation and  implementing new go-to-market client coverage models.

He is a member of the UGA Board of Visitors, the UNC Kenan-Flagler Board of Advisors, Alpha Phi Alpha Fraternity, and the Park Church. He is the founding and current board chair of The Park Community Development Corporation, focused on affordable housing, workforce development, and healthy living. Jackson and his wife of 35 years, Nina, reside in Charlotte, North Carolina.