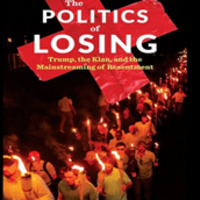 "The Politics of Losing: Trump, the Klan, and the Mainstreaming of Resentment,” Rory McVeigh, professor of sociology, University of Notre Dame.

McVeigh is the director of The Center for the Study of Social Movements and co-editor of American Sociological Review.  His research focuses on identifying structural foundations of social conflict and investigating long-term consequences of social movement mobilization. Much of his recent work addresses social and political consequences of different forms of segregation. He is the author of The Rise of the Ku Klux Klan: Right-Wing Movements and National Politics (University of Minnesota Press, 2009).  Recent publications include “Political Polarization as a Social Movement Outcome: 1960s Klan Activism and its Enduring Impact on Political Realignment in Southern Counties, 1960-2000” (with David Cunningham and Justin Farrell in American Sociological Review, December 2014), “Educational Segregation, Tea Party Organizations, and Battles over Distributive Justice (with Kraig Beyerlein, Burrel Vann Jr., and Priyamvada Trivedi in American Sociological Review, September 2014), and “Plausibility Structures, Status Threats, and the Establishment of Anti-Abortion Pregnancy Centers” (with Bryant Crubaugh and Kevin Estep in American Journal of Sociology (November 2016).

Sponsored by the Georgia Workshop on Culture, Power and History and the Willson Center for Humanities & Arts.