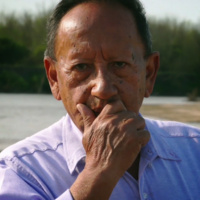 A free screening of the Argetinian documentary Lantéc Chaná, featuring a presentation and post-film Q&A  with writer-director Marina Zeising. Part of the Indigenous Languages Film Series, celebrating Hispanic Heritage Month and UNESCO International Year of Indigenouos Languages. Sponsored by the Willson Center for Humanities and Arts, LACSI, the departments of Romance languages, linguistics, history, sociology, and theatre and film studies, and the Institute of Native American Studies.

Blas Jaime, a retired 71-year-old man from Entre Ríos, Argentina, publicly revealed that he is the last heir of the Chaná language, an ethnicity native from South America that was considered extinct for more than 200 years. Pedro Viegas Barros, a researcher and linguist of indigenous languages, validated his tongue and culture. His investigations caused recognition by UNESCO as the last Chaná speaker.