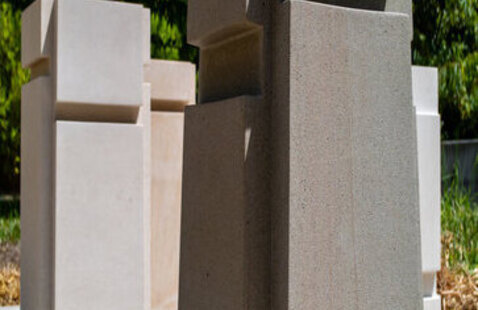 https://georgiamuseum.org/exhibit/rachel-whiteread/
View map Free Event
Add to calendar
Save to Google Calendar Save to iCal Save to Outlook

Five cast-stone sculptures by Rachel Whiteread reinterpret the artist’s earlier resin castings of the space beneath chairs. The works are arranged in a table setting, reinforcing their domestic nature and origins. Variations in the stone type and surface textures of each piece make use of changes in outdoor lighting over the course of a day. All loans are courtesy of Gagosian. The museum has also selected works on paper by Whiteread and related artists from its collections that will be on display inside, in the galleries on the second floor. These works provide additional context to the use of negative space in Whiteread’s work.Whiteread was born in London in 1963. She studied painting at Brighton Polytechnic from 1982 to 1985 and sculpture at the Slade School of Fine Art from 1985 to 1987. In 1993, she was the first woman to win the Turner Prize. She represented the British Pavilion at the 47th Venice Biennale in 1997, and in 2000 she completed a commission for the Holocaust Memorial at the Judenplatz in Vienna, Austria. From 2017 to 2018 a retrospective exhibition of her work was on view at the Tate Britain in London and the National Gallery of Art in Washington, D.C.