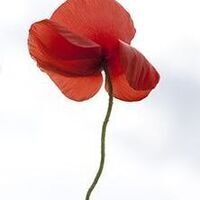 Part of the observance to mark the centennial end of World War I, the exhibition also pays homage to Moïna Belle Michael, originally from Monroe, who was instrumental in ensuring the red poppy flower became a symbol to remember the victims and veterans of war.

The exhibit is the work of Lee Karen Stow, an independent documentary photographer and visual artist based in the North of England, UK. Since 2007 when she met women in Sierra Leone displaced by a decade of civil war, she has devoted her practice to recording the personal narratives of women of war, conflict and genocide.