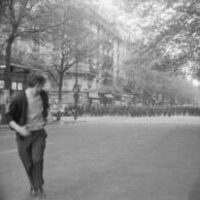 Au cœur de Mai 68 commemorates the 50th anniversary of France’s iconic May 1968 protests through a series of 43 previously unseen photos by French photographer Philippe Gras, discovered after his death in 2007.

May 1968 still plays an important role in France’s collective memory and continues to fascinate abroad as well. Gras’ photos reveal the uncertainty and hope that characterized the demonstrations in the streets of Paris. These photos, simultaneously empathetic and distant, highlight the improvisational and organic nature of the uprisings, as well as the important role played by slogans and propaganda.

This event is co-organized by the Circle Gallery, the College of Environment and Design, the Alliance Française d’Atlanta, the Institut Français, the Association des Amis de Philippe Gras, Films des Quatre Planètes and the Cultural Services of the French Embassy.

In conjunction with this exhibition, the Alliance Française d’Atlanta will screen filmmaker Dominique Beaux’s The Odd Spring of May 1968, a beautifully woven series of interviews which tell the story of the protests through the eyes of politicians, police and those “on the other side of the barricade. The screening takes place at the Alliance Française d’Atlanta, 1201 Peachtree St. NE, Suite 1104 in Atlanta.

Willson Center for Humanities and Arts