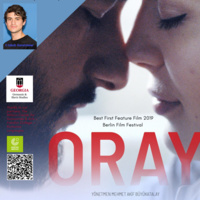 Due to recent travel restrictions, the events with filmmaker Mehmet Büyükatalay have been postponed to a later date.

Turkish-German director Mehmet Büyükatalay discuss Filmmaking In and Beyond Film School with UGA German students and film production faculty and students at a panel discussion at 11 a.m. in room 400 of the Fine Arts Building, followed by a snacks in the lobby of Joe Brown Hall.  Büyükatalay's  debut film, Oray, won Best First Feature Film in the 2019 Berlin Film Festival, and will be featured at a screening at Ciné arthouse cinema in downtown Athens, Georgia, at 7:30 p.m, concluding with a Q&A session with the director. Admission is free for both events, and the public is invited.