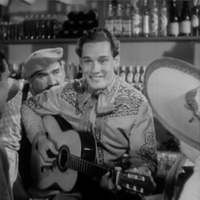 The charro—a horseman dressed in a short jacket and wide brimmed sombrero—is Mexico’s most visual and aural construction of cultural nationalism and Mexican masculinity during the post-Revolutionary years. While the figure of the charro became a crucial archetype in nationalist rhetoric, it was his musical repertoire that solidified his importance in film, particularly in the comedia ranchera (ranch comedy), film musicals that take place in the countryside and feature a singing charro protagonist. Although portrayed and sold by cultural institutions a symbol of traditionalist culture and machismo during the 1930s and 1940s, the singing charro can be interpreted as an experimental figure, a consequence of modernity, cultural hybridity, and cosmopolitanism, interpellated through popular theater, radio, and film. This presentation discusses the comedia ranchera and the intricate visual and musical depiction of the singing charro in three key films: Allá en el Rancho Grande (1936), ¡Ay Jalisco, no te rajes! (1941), and Los tres García (1946). The music in these films solidifies, or exalts, the charro’s changing sense of machismo and his connection with nationalism and the nation in the face of his compatriots and foreigners.