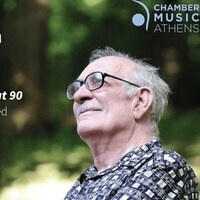 Piano faculty members Liza Stepanova and Martha Thomas will be joined by 8 select UGA piano graduate students at The Georgia Museum of Art for the Georgia Premiere of George Crumb’s art-inspired “Metamorphoses”: George Crumb at 90 starting at 5 pm. There will also be a short world premiere of a piece written by Hodgson School composition students in honor of Crumb.

This event is co-sponsored by the Georgia Museum of Art and concludes their Family Day.

George Crumb (b. 1929) is one of the most frequently performed composers in today's musical world. Crumb is the winner of Grammy and Pulitzer Prizes, and continues to compose new scores that enrich the lives of all who come in contact with his profoundly humanistic art. Crumb's music often juxtaposes contrasting musical styles, ranging from music of the western art-music tradition, to hymns and folk music, to non-Western musics. Many of Crumb's works include programmatic, symbolic, mystical and theatrical elements, which are often reflected in his beautiful and meticulously notated scores.

A shy, yet warmly eloquent personality, Crumb retired from his teaching position at the University of Pennsylvania after more than 30 years of service. Honored by numerous institutions with honorary Doctorates, and the recipient of dozens of awards and prizes, Crumb makes his home in Pennsylvania, in the same house where he and his wife of more than 60 years raised their three children. George Crumb's music is published by C.F. Peters and an ongoing series of "Complete Crumb" recordings, supervised by the composer, is being issued on Bridge Records.