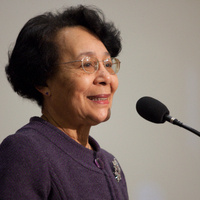 As the first African American graduate of the University of Georgia, Mary Frances Early’s impact as a civil rights icon and music educator endures. She has inspired and influenced generations of students, schools and black communities across the nation. She played an integral role in the campaign for racial equality and remains a tireless advocate in the field of education. In 2018, Early was awarded the UGA President’s Medal in recognition of her legacy and lifetime accomplishments.

The naming of the Mary Frances Early College of Education was approved by the Board of Regents on Oct. 16, 2019. To celebrate this occasion, Albany State University President Marion Fedrick (BSEd ‘94, MPA ‘02) will deliver the 20th annual Mary Frances Early lecture, named in honor of Early by UGA’s Graduate and Professional Scholars (GAPS).

Lectures and Discussions, Receptions and Recognitions