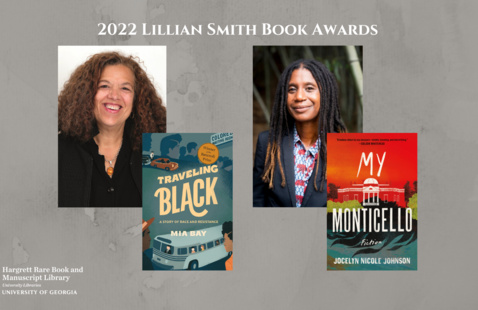 The Lillian Smith Book Awards are sponsored by the Southern Regional Council, University of Georgia Libraries, DeKalb County Public Library/The Georgia Center for the Book, and Piedmont College. This virtual event is free and open to the public, but attendees must register on Eventbrite to receive the link to the Zoom webinar.

The LSBA committee is proud to award the 2022 Lillian Smith Book Award to Mia Bay for "Traveling Black: A Story of Race and Resistance" and Jocelyn Nicole Johnson for "My Monticello: Fiction."

The Southern Regional Council established the Lillian Smith Award shortly after Smith's death in 1966. Internationally acclaimed author of the controversial novel, Strange Fruit (1944), Lillian Smith was the most liberal and outspoken of white, mid-twentieth century Southern writers on issues of social and racial injustice. When other Southern liberals were charting a cautious course on racial change, Smith boldly and persistently called for an end to segregation. For such boldness, she was often scorned by more moderate southerners, threatened by arsonists, and denied the critical attention she deserved as a writer. Yet she continued to write and speak for improved human relations and social justice throughout her life.

Selected by a panel of judges, nominated books represent outstanding creative achievements worthy of recognition because of their literary merit, moral vision, and honest representation of the South, its people, problems, and promises. The Lillian Smith Book Awards honors those authors who, through their writing, carry on Smith's legacy of elucidating the condition of racial and social inequity and proposing a vision of justice and human understanding that represents the ideals of a racially just society.

The 2022 winners will receive a specially-designed, glass trophy bearing the embossed Lillian Smith Book Award logo. The award was designed by Nate Nardi of Decatur Glassblowing, and the logo was designed by Jerri Wilson of the DeKalb County Public Library.

Lectures and Discussions Receptions and Recognitions