By Office of Research, Willson Center for Humanities and Arts
Department of English, Lamar Dodd School of Art 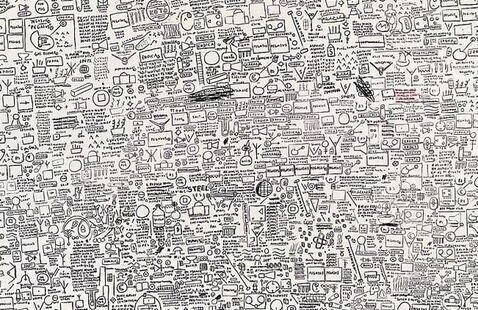 "Field and Fragment: The Future of the Romantic Compositions from Basquiat to Beethoven," Nathan Brown, associate professor of English, Canada Research Chair in Poetics, and director, Centre for Expanded Poetics, Concordia University, Montreal.

Brown is the author of three books: The Limits of Fabrication: Materials Science and Materialist Poetics (2017), Rationalist Empiricism: A Theory of Speculative Critique (2021), and Baudelaire's Shadow: An Essay on Poetic Determination. He is also the translator of a new edition of Baudelaire's The Flowers of Evil (2021).

In the last two years of his life, Jean-Michel Basquiat began to include frequent allusions to Beethoven's Eroica symphony in his paintings and drawings, including in his late masterpiece, Pegasus (1987). This lecture focuses on these citations as a major thematic feature of Basquiat's late work, his mourning for Andy Warhol, and his reflexive engagement with his own signifying strategies. Addressing genre and differential repetition as formal mediations of ambiguous signs, not only in the context of Basquiat's compositions but also with respect to the rise of the symphony as a form, the lecture concludes by considering the relevance of the Haitian Revolution to Basquiat's reception of Beethoven's symphony and the cancelled homage to Napoleon on its original title page.