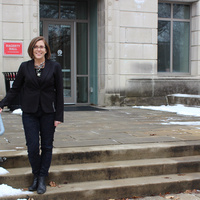 This talk is part of The Southern Strategies of Early Modern Empires (circa 1444–1800), an Andrew W. Mellon Foundation grant-funded research project in the expanded Global Georgia Initiative of the Willson Center for Humanities and Arts.

Urban festivals, such as the royal entry of Philip III into Lisbon in 1619, were one way in which the global geography of Portuguese imperial expansion was communicated to a wider public at home. But how can we interpret the presence and performance in these festivals of not only allegorical figures representing foreign peoples and cultures, but also of non-European actors representing them? This paper focuses on an account describing a play staged for Philip III’s entry, and in particular the African-inflected performance of a ‘Brazilian king,’ in order to argue for other ways of interpreting the festive participation of non-Europeans, beyond their contribution to the celebration of Portuguese imperial power.