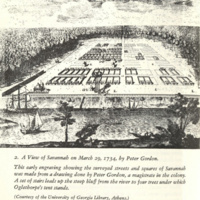 "Atlantic Georgia: Freemasonry, Religion, and the 18th-Century British Empire," Jessica Harland-Jacobs, associate professor of history, University of Florida. This lecture is funded by a grant from The Andrew W. Mellon Foundation through the Global Georgia Initiative research program of the Willson Center for Humanities and Arts, and a Department-Invited Lecturer grant, also from the Willson Center.

From its emergence as a British colony in the 1730s, Georgia was fully imbricated in far-reaching networks that undergirded the expanding British Empire and interconnected the societies of the Atlantic world. This talk explores the fraternal and religious networks that took root in colonial Georgia and contributed to the province’s rapid development from the 1750s. Particular attention will be paid to the Free and Accepted Masons, whose cosmopolitan fraternalism was both manifest in and tested by the diverse religious and racial landscape that Atlantic Georgia presented.

Harland-Jacobs' first book, Builders of Empire: Freemasonry and British Imperialism, 1717-1927, was published by the University of North Carolina Press in 2007. It is the first study of the relationship between freemasonry and British imperialism, and convincingly demonstrates that British freemasons were effective builders of a global empire over two centuries and five continents (Europe, Africa, Asia, North America/Caribbean, Australasia). Harland-Jacobs traces how this relatively new social organization created a universal network that reinforced British values and objectives in vastly distant and different locales, which in turn impacted the brotherhood. She also addresses the issues of globalization, imperial power, supranational identity, and masculinity. The book received no less than 16 scholarly reviews; several reviewers called her research “magisterial.”

Harland-Jacobs has recently co-edited a special issue of Atlantic Studies on “The Fraternal Atlantic.” Her current project examines the incorporation of Catholic colonies into the British Empire during the long eighteenth century.