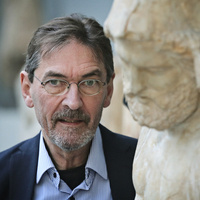 "Color into the Equation: Classical Greek Sculpture in a New Light," Jan Stubbe Østergaard, Emeritus Research Curator, Ny Carlsberg Glyptotek, Copenhagen. Presented by the Willson Center for Humanities and Arts in partnership with the Lamar Dodd School of Art.

Preregistration for this virtual event, which will be conducted via Zoom, is required and available here. After registering, you will receive a confirmation email containing information about joining the meeting.

An internationally esteemed expert on Greek and Roman art, Jan Stubbe Østergaard has pioneered the modern study of the painting and gilding (polychromy) that defined the aesthetics of ancient marble statuary. He directed the first systematic interdisciplinary study of color on the important museum collections of Greek and Roman marble sculpture at the Ny Carlsberg Glyptotek, Copenhagen. In this role he edited the pioneering series of digital publications Tracking Colour I-IV and the widely-heralded exhibition and catalogue Transformations: Classical Sculpture in Colour (2014).

Since the 1980s, research on the polychromy of Greek and Roman sculpture has increased at an accelerating pace. The material under study is sculpture in all materials and formats. This includes those in an architectural context, taking into consideration the technical as well as aesthetic symbiosis of the polychromy with the surrounding architecture.

As a field of study, polychromy research is characterized by being fundamentally interdisciplinary in its methods and international in scope and structure. The last two decades has seen a concerted combination of wide-ranging systematic investigations and disseminations through both regular scholarly meetings and publications, and communicated to very large, international audiences by way of powerful museum exhibitions. The accumulated effect of these efforts is a fundamental paradigm shift in the way classical sculpture is viewed and understood: color now has decisively entered the equation as in integrated, sophisticated element of the three-dimensional visual medium. The lecture will exemplify this ‘new light’ by way of case studies focused on high-quality sculptures, from the 6th century BCE through the 2nd century CE. What is the relation between the character of the forms and that of the applied polychromy?

The point of departure will be a discussion of the premises for the hermeneutics of classical archaeology. This will center on the question of the epistemological consequences of the taxonomies which traditionally structure the discipline. What we mean when applying the concept of ‘art’ to classical sculpture? And how does this term stand in relationship to the classical concept of techne (Greek) / ars (Latin)?