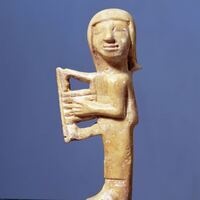 In the fifth century B.C., Pindar of Thebes wrote odes to celebrate the victories of great athletes at the pan-hellenic games. He celebrated their prowess by re-telling the myths of ancient Greece in a way that elevated the athletes' status and suggested that they, like the heroes of old, would be glorious forever. But the mythic women had little to say. Instead, they were frequently abducted or maligned. In this lecture concert, learn more about some of those silenced women in new music and poetry.

This virtual event will be published on the Willson Center website at 10 a.m. Thursday, Nov. 19.

The event, sponsored by the UGA Classics Department (Felson Fund) and by the Willson Center for Humanities and Arts, is part of the university's Spotlight on the Arts festival. More information on the 2020 Spotlight on the Arts festival, including a schedule of events, can be found at arts.uga.edu as well as on the Arts Council Facebook page (facebook.com/UGAarts), Twitter feed (@UGA_arts) or Instagram (instagram.com/uga_arts).

Nancy Felson is Professor Emerita of the University of Georgia department of Classics. Her special areas of interest include Homeric poetry, Pindar, Greek tragedy, Gender Studies, and literary and performance theory. She taught at UGA for 32 years and introduced “Reacting to the Past” in the Classics and seven other departments – an innovative pedagogy in which students assume historical roles at critical historical moments and determine outcomes. She also conceived of and founded the Humanities Center at UGA, which became the Willson Center for Humanities and Arts. Her book Regarding Penelope (Princeton 1994) will be reissued with a new chapter by the Center for Hellenic Studies. She has edited three volumes on innovative approaches to classics: Symbolism in Greek Poetry, Semiotics and Classical Studies, and The Poetics of Deixis in Choral Lyric. Her current interests include learning more about ancient Greek poetry through modern performance and prison pedagogy.

Alex Silverman is an award-winning composer and musical director who works mainly in the theatre. He has made music for shows in many of the UK’s major playhouses, including a dozen at Shakespeare’s Globe, and in 20 countries worldwide. His work is regularly heard on Radio and TV as well as reaching millions online. Alex has arranged works by Monteverdi, Parsons, Locke, Humfrey, J.S. Bach, Mozart, and Wagner, as well as dozens of modern songs for choirs. He has worked as a consultant on editions of large-scale works by major English composers, and is a busy choral conductor. A classicist by training, Alex has been Composer and Music Director for the Cambridge University Greek Plays since 2010, and has contributed to projects on performance of Greek chorus by Barefaced Greek and Live Canon, including workshops and performances at UBC, Harvard, and Oxford’s APGRD. In this somewhat quieter period for the arts, Alex has returned formally to academia, and is researching contemporary musical responses to ancient drama at the University of Bristol.

Helen Eastman is a UK based writer and director of theatre, opera and film who has worked extensively in Europe, America and Canada. She trained at LAMDA, after graduating from Oxford University and has a doctorate in Classics from King’s College London. She is an artistic associate of the APGRD at Oxford University, and a visiting lecturer in playwriting at the University of Westminster. She founded Live Canon, fifteen years ago, and has created hundreds of performances for the company at venues from Abbey Road to Broadway. She is currently writing an opera about climate protests for Montpellier Opera.