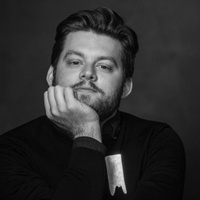 This lecture is presented by the jewelry and metalwork area of the Lamar Dodd School of Art, with support from the Willson Center for Humanities and Arts. It is sponsored in part by the Ann Orr Memorial Fund and Phi Beata Heata.

Decker's work pulls together memories from his military childhood and queers them with enameled toy references. Layers of glass, metal, and color reflect back the moments, objects, and queer undercurrents of an artist struggling with the love of violent objects and the mediation of the masculinity that comes with them.

An accomplished poet as well as an immensely inventive enamelist, Aaron Decker creates wearable forms that are both personally referential and resoundingly universal. Much of the layered imagery in his work has to do with childhood memories – some pleasant and reassuring, others, darker and more foreboding.  Raised in a military family, he moved frequently while growing up and came out to his family when he was 16. As the gay son of a military father, he grew up an outsider, developing deeply ambivalent feelings about the US military and its aggressive ideals. Many of the allusions in his work (medals, planes, camouflage, etc.) reference this military context and reflect Decker’s astute critical stance.

Decker is a jewelry artist based in Detroit. He is the recipient of Mercedes Benz Emerging Artist Award 2015 and the MARZEE Graduate prize 2015. He Received his MFA from Cranbrook Academy of Art in may 2015. In 2012 he was a recipient of The Windgate Fellowship, which allowed him to participate as an Artist-In-Residence in the Turnov International Jewelry Symposium, Turnov, Czech Republic, with the Association of Contemporary Portuguese Jewelers and with the Estonian Academy of Fine Arts. Additionally, Aaron Decker’s work has been shown in exhibitions in the USA, Netherlands, China, Germany and more.

During his visit, Decker will also give an enameling demonstration and workshop for students in the jewelry and metalworking area.