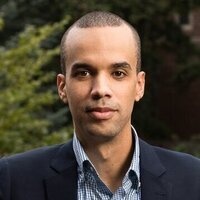 "Behind the Laughs: Community and Inequality in Comedy," Michael Jeffries, associate professor of American studies, Wellesley College. Sponsored by the Georgia Workshop on Culture, Power and History and the Willson Center for Humanities and Arts.

When comedians define success, they don't talk about money—they talk about not quitting. They work in a business where even big names work for free, and the inequalities of race, class, and gender create real barriers. But they also work in a business where people still believe that hard work and talent lead to the big time. How do people in comedy sustain these contradictions and keep laughing? Through interviews with comedians in New York, Chicago, and Los Angeles Behind the Laughs destroys the myth of meritocracy in comedy and shows how comedians rely on each other to make it.

Jeffries graduated from Swarthmore with a B.A. in sociology/anthropology and earned a Ph.D. in African American Studies from Harvard University in 2008. A qualitative sociologist, he studies race, gender, politics, identity, and popular culture. Jeffries is the author of three books, Behind the Laughs: Community and Inequality in Comedy (2017), Paint the White House Black: Barack Obama and the Meaning of Race in America (2013) and Thug Life: Race, Gender, and the Meaning of Hip-Hop (2011).