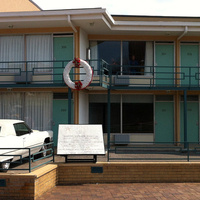 The Mountaintop
By Katori Hall
Directed by Roger Guenveur Smith

On April 4, 1968, Martin Luther King, Jr. was assassinated outside of his room at the Lorraine Motel in Memphis. What happened inside room 306 on the evening of April 3 is the subject of Katori Hall’s compelling drama, The Mountaintop. Hours after King’s final speech, punctuated by his immortal line, “I’ve been to the mountaintop,” the celebrated reverend forms an unlikely friendship with a motel maid as they talk into the early hours of what will be his final day.

Recorded before a live audience in Los Angeles at the James Bridges Theater, UCLA.

Listen to this performance on this page during the time frame noted above.

L.A. Theatre Works
We are pleased to present two free performances by L.A. Theatre Works, the nation’s leading producer of audio theatre, with a 30-year history of recording classic and contemporary stage plays. Featuring more than 500 titles, the company’s audio library is the largest of its kind in the world and reaches millions of people every week through worldwide radio broadcasts, live performances, and podcasts. All of these activities support L.A. Theatre Works’ core belief that theatre is a transformative art form that educates, promotes civic dialogue, and motivates social activism. For more information, please visit www.LATW.org.