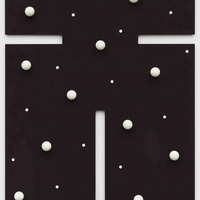 Kiki Kogelnik, Julia Scher, Erika Vogt, Lisa Williamson is a group show that features work by four artists made between 1967 and the present, which span mediums including drawing, sculpture, and video. There are a number of themes cross referenced between the works presented in the show including technology in relation to the human body, performance, and formal representations of the female figure. The exhibition is curated by Tif Sigfrids, co-director of ACES (Arts Career Entrepreneurial Space) at the Lamar Dodd School of Art.

Kogelnik (1935-1997) was an Austrian artist whose work is most known for being associated with the pop art movement of the 1960’s. In the exhibition, two works on paper from 1967 are shown depicting female figures from a simultaneous internal and external perspective. The “dismembered techno-bodies” are common to her work from this time period which reference themes common to second-wave feminism including reproductive rights.  Her works stand out for the ways in which she was able to fold substantial political inquiry into brightly colored compositions.

Scher (b. 1954, Los Angeles) lives and works in Cologne, Germany.  She is well known for her videos, performances, and installations that deal with surveillance and the ways in which our identities are formed and our behaviors are affected through the act of being surveilled. A video excerpt from a piece called Occupational Placement is included in the exhibition.  The piece, which was originally produced for an exhibition at the Wexner Center for the Arts in Columbus, Ohio in 1990 and typical of other works by Scher, combines footage from live security cameras with pre-recorded video, in turn affecting the viewer's understanding of time and their movement through space.

Vogt (b. 1973) lives and works in New York.  Similar to the other artists in the show, she works in a number of mediums including sculpture, printmaking, and video. The sculptures presented in the exhibition come out of an ongoing project called Artist Theater Program in which performances are choreographed around artworks. The sculptures, which reference historical knives, were first shown in 2016 and were conceived of as props for a performance. Their bright colors are culled from images of political protests happening around the time period in which the sculptures were made. In this presentation the sculptures can be thought of as stand-ins for performers.

Williamson (b. 1977) lives and works in Los Angeles, California. Her work exists at the cross-section of sculpture and painting and follows a strict internal logic that emphasizes formal concerns. The two hanging sculptures in the exhibition come from a recent body of work, initiated in 2016, called Body Boards. The six and a half foot tall sculptures address the concept of portraiture and the compression of psychological space into the external reality of the sculpture. Created specifically for this exhibition, Constellation, is seen as a form of self-portraiture in which a finely tuned calibration of color and space resonate as forms of expression.