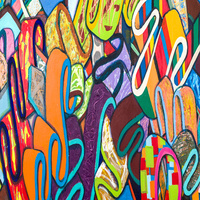 “Kevin Cole: Soul Ties” features selected works by Atlanta-based painter and mixed-media artist Kevin Cole. Cole was born in Pine Bluff, Arkansas, and remains active in Atlanta, Georgia, and nationally. Cole was named Georgia State Artist of the Year in 1996 and has completed over 35 public art commissions, including the Coca-Cola Centennial Olympic Mural for the 1996 Olympic games and “Soul Ties That Matter,” a 55-foot-long installation created for Hartsfield-Jackson Atlanta International Airport in 2018. The artist’s work is included in more than 3,600 public, private and corporate collections throughout the United States, including the new National Museum of African American History and Culture at the Smithsonian Museum in Washington, D.C.

Cole’s paintings, three-dimensional wooden and metal constructions, are recognizable due to his frequent use of the necktie as a motif, which alludes to both struggle and celebration in the African American experience. Colorful works such as “Spiritual Celebration with Miles, Dizzy and Coltrane” (1992) make reference to the rich history and improvisational nature of jazz and blues music. In addition to the exhibition, “When My Scars are My Testimony” (2018) is on display in the museum’s M. Smith Griffith Grand Hall as an elegant amalgamation of twisted ties formed with thin strips of etched aluminum.