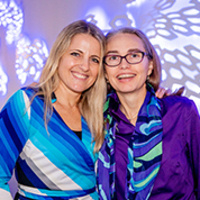 Rutstein will visit the university for the second time this academic year following her keynote discussion at November’s national conference of the Alliance for the Arts in Research Universities (a2ru). Rutstein will again give a public presentation with the widely known oceanographer Samantha Joye, Athletic Association Professor in Arts and Sciences in the marine sciences department of UGA’s Franklin College of Arts and Sciences.

The conversation, titled “Expeditions, Experiments and the Ocean: Adventures and Discoveries,” will be held March 28 at 7 p.m. in the M. Smith Griffith Auditorium of the Georgia Museum of Art. It will be moderated by Nicholas Allen, Franklin Professor of English and director of the Willson Center. Prior to the event, a public reception will begin at 6 p.m.

In addition to her conversation with Joye and Allen, Rutstein will give a talk at Creature Comforts Brewing Co. in downtown Athens at 4 p.m. March 27, part of Creature Comfots' Get Artistic initiative.

The Delta Visiting Chair, established by the Willson Center for Humanities and Arts through the support of The Delta Air Lines Foundation, hosts outstanding global scholars, leading creative thinkers, artists and intellectuals who participate in public events at UGA and in the Athens community.

Since Rutstein’s November visit, she and Joye have completed an expedition to Mexico’s Guaymas Basin in the Sea of Cortez that included a deep-sea dive aboard Alvin, a submersible vessel able to withstand the crushing pressure of the extremes of the deep ocean. While scientists explored hydrothermal vents and carbon cycling processes in the basin, Rutstein set up her studio on the ship and created new works inspired by the data collected in real time.

Rutstein’s 64-foot-long interactive sculptural installation with laser cut steel and LED lights, and a monumental four-part painting, remain installed at the Georgia Museum of Art through October. A mural-sized banner is also on display at the Lamar Dodd School of Art. The sculpture, with its hexagonal forms and reactive lighting, and the shapes present in the paintings were inspired by the hydrocarbon structures and bioluminescence present in Guaymas Basin.

In the process of creating works inspired by geology, microbiology and marine science, Rutstein has previously collaborated with scientists aboard research vessels sailing from the Galapagos Islands to California, Vietnam to Guam, and in the waters surrounding Tahiti. Prior to her expedition with Joye, she made her first descent in Alvin to the ocean floor off the Pacific Coast of Costa Rica with a team of scientists from Temple University in October 2018.

Rutstein has exhibited in museums, institutions and galleries, and has received numerous awards including the prestigious Pew Fellowship in the Arts.

Joye’s research examines the complex feedback that drive elemental cycling in coastal and open ocean environments, and the effects of climate change and anthropogenic disturbances on critical environmental processes to gain a better understanding of how changes will affect ecosystem functioning.