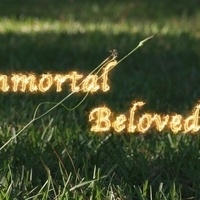 Dodd MFA candidate Robby Toles reimagines the amateur Youtube vlog with a dedicated audience as a romantic production for a singular recipient, Immortal Beloved. Toles inhabits the role of influencer as he recites a 19th century love letter written by Ludwig van Beethoven. Simultaneously speaking to the viewer, his phone, and his own reflection, Toles flirts with his mirror image in a Narcissusian curse.

The installation invites viewers to participate and perpetuate their own image, providing opportunities to emulate and engage with the simulated Youtube star. Immortal Beloved challenges authenticity as the artist’s image takes precedence over place, and questions where the ‘real’ might exist if everything is performed. Is this a new phenomenon, or have methods of technology always vacated sincerity?

Toles is a multidisciplinary artist and MFA candidate in Studio Art at the University of Georgia. His practice often pulls from commercial and popular culture with an interest in the individual’s relationship to technology and the self. Toles has had work exhibited nationally, published internationally, and has won The Clare Hart DeGolyer Memorial Fund from the Dallas Museum of Art. He received his BFA in photography from the University of North Texas.