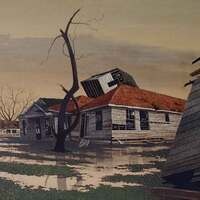 Hurricane Katrina and Its Aftermath in the Art of Rolland Golden

As the 15th anniversary of Hurricane Katrina approaches, this exhibition presents works Rolland Golden created in its aftermath. The storm resulted in the deaths of over 1,000 people and left survivors without access to basic necessities for months. These paintings and drawings, some of the last work Golden made, document the devastation of the storm and focus on the traumatic experiences of New Orleanians.

Golden was a New Orleans native and longtime resident of the area. His career began in the 1950s, when he enrolled in the McCrady art school after four years in the navy. Golden developed his own style of painting, which includes detailed preparatory drawings, an example of which is in this exhibition. In his early years as an artist, Golden painted scenes of the French Quarter and southern landscapes. He was an adept watercolorist. In his mature style, he used expressive, bold colors, often blending large areas of color into each other without borders. In the aftermath of Katrina, Golden used his talent for geometric abstraction and what he termed “borderline surrealism” to translate painful experiences into visual poetry.