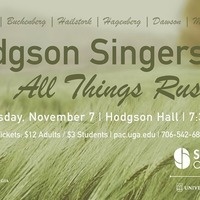 Hodgson Singers: All Things Rush On

The University of Georgia Hodgson Singers will perform their first concert of the 2019-2020 Ensemble Series during the 8th annual Spotlight on the Arts.

The program, “All Things Rush On,” comes from the title of a piece the ensemble commissioned from Canadian composer Kieren MacMillan, set to text by Rabindranath Tagore. The program’s theme is most explicit in works by Bach, Hailstork, and MacMillan, and Averitt.

In addition to the MacMillan piece, they will also premiere an arrangement set by graduate composition student, Benjamin Dawson, who won a composition area competition to be named the Composer-In-Residence for the Hodgson Singers this year. Other recently composed works on the program include pieces by living English composers, Owain Park, and Philip Stopford – both of whom write regularly for the collegiate chapel choirs of England.

Director of Choral Activities Dr. Daniel Bara included Owain Park’s piece, “Beauti quorum via,” to prepare the choir for a larger piece by Park, that the choir will sing with the acclaimed British professional choir, Tenebrae, on Nov. 10 as part of the PAC series.

The choir will end the concert with a new suite of southern hymns set to four-hand piano, composed by American composer William Averitt. The intricate and colorful piano accompaniment will be played by two new Hodgson School graduate students, Carlos Varela and Pedro Che. Professor David Starkweather with join the choir on cello for Bach’s motet “Komm, Jesu, Komm.”