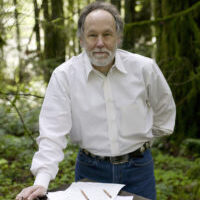 Barry Lopez will speak on “What Horizons Next?” at the 2019 Earth Day & Odum Environmental Ethics Lecture.

Lopez is an essayist, author, and short-story writer, and has traveled extensively in remote and populated parts of the world.

He is the author of Arctic Dreams, for which he received the National Book Award; Of Wolves and Men, a National Book Award finalist, for which he received the John Burroughs and Christopher medals; and eight works of fiction, including Light Action in the Caribbean, Field Notes, and Resistance. His essays are collected in two books, Crossing Open Ground and About This Life.

His most recent books are Home Ground: Language for an American Landscape (2006), a reader’s dictionary of regional landscape terms, which he edited with Debra Gwartney, and Outside (2015), a collection of six stories with engravings by Barry Moser. His new book, Horizon, will be published in March 2019 by Penguin Random House.

Lopez contributes regularly to Harper’s, Granta, The Georgia Review, Orion, Outside, The Paris Review, Manoa, and other publications in the United States and abroad. His work is widely translated and appears in dozens of anthologies.

Lopez has served as the Welch Professor of American Studies at the University of Notre Dame and the Glenn Distinguished Professor at Washington & Lee University. He has also taught at the Bread Loaf Writers’ Conference and other venues, and read or spoken at nearly a hundred universities. He travels regularly to Texas Tech University where he is the university’s Visiting Distinguished Scholar. He is a recipient of the Award in Literature from the American Academy of Arts and Letters, the John Hay Medal, Guggenheim, Lannan, and National Science Foundation fellowships, Pushcart Prizes in fiction and nonfiction, the St. Francis of Assisi Award from DePaul University, the Denise Levertov Award from Image magazine, and honors from the Academy of Television Arts and Sciences, the Association of American Geographers, the New York Public Library, the Nature Conservancy, and the American Society of Magazine Editors. In 2002 he was elected a Fellow of The Explorers Club.

In addition to being part of the Global Georgia Initiative public event series, Lopez’s talk is presented as The Georgia Review‘s Earth Day Lecture and the Odum Environmental Ethics Lecture.

This event is associated with the Global Georgia Initiative research group in Coastal Studies, funded by The Andrew W. Mellon Foundation.

The Global Georgia Initiative presents global problems in local context by addressing pressing contemporary questions, including the economy, society, and the environment, with a focus on how the arts and humanities can intervene. Global Georgia combines the best in contemporary thinking and practice in the arts and humanities with related advances in the sciences and other areas. The series is made possible by the support of private individuals and the Willson Center Board of Friends.