From Colony to Statehood: The Georgia Open History Library 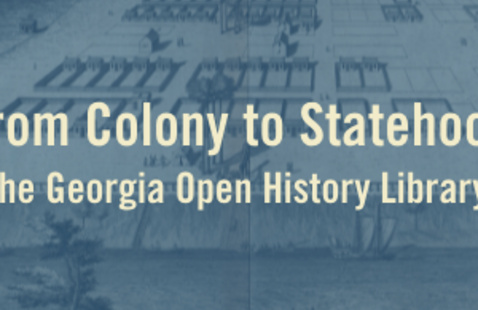 Richard B. Russell Special Collections Libraries, Hargrett Gallery View map No Admission
Add to calendar
Save to Google Calendar Save to iCal Save to Outlook

In 2026, the United States will mark the 250th anniversary of its founding. In anticipation of this event, the University of Georgia Press has developed the Georgia Open History Library: From Colony to Statehood in the New Union. This resource provides free digital access to 45 out-of-print volumes focused on Georgia from the colony’s founding through the American Revolution.

On display in the Hargrett Gallery of the UGA Special Collections Building, this exhibition showcases a selection of original manuscripts and rare books held by the Hargrett Library documented in these newly digitized volumes. Touch screens in the gallery provide access to digitized versions of these resources hosted in the Digital Library of Georgia.

This display was made possible with support from the Humanities Open Book Grant, a program of the National Endowment for the Humanities.