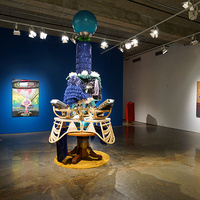 Once purely functional, fountains have for centuries served as a form of spectacle, the marking of triumph and the grandeur of civilizations. Just think of the Trevi Fountain in Rome filled with sparkling coins of promised return or the Bellagio Fountain in Las Vegas, elegant sprays of water set to the croon of Frank Sinatra. Melissa Brown’s paintings and Jaime Bull’s sculptures in this exhibition play broadly with notions associated with fountains including the source from which inspiration spurts, to gush forth, and the intricate, purely decorative function of such architecture. In turn, Brown and Bull’s colorful and, at times, exaggerated works act in a similar spirit as some of the world’s most superlative springs.

Brown creates paintings and animations that explore what is otherworldly about ordinary experience. Her paintings collage disparate techniques: photo screenprint, airbrush, and observational oil painting in order to present a multi-registered view of reality. Solo exhibitions and two-person projects have included: Going AWOL, Biggins Gallery at Auburn University, Between States, Derek Eller Gallery, Tennis Elbow, the Journal Gallery, Brooklyn, Past Present Future at Magenta Planes, Paper Fortune at CANADA, in New York City. Internationally she has mounted solo exhibitions at Kenny Schacter, ROVE in London and Roberto Paradise in Puerto Rico.  Her paintings, prints, and animations are included in ‘Providence’, at the Museé International des Arts Modestas, France. Her work has been shown at Mass MOCA, Gavin Brown’s Enterprise, P.P.O.W, Socrates Sculpture Park, High Desert Test Sites, Art in General, Sue Scott Gallery and Bronx River Art Center, to name a few. She staged How to Win the Lottery at the Nuit Blanche in Toronto 2009, a performance that attempted to collectively win the lottery with thousands of other people.  She was awarded the Joan Mitchell Grant for painting in 2012, and was awarded a residency at the Joan Mitchell Center in New Orleans, in 2019. Her work is in the permanent collections at the Whitney Museum of Art and the New York City Department of Education. She is tenured faculty at Lehman College, CUNY and is represented by Derek Eller in New York, New York.

Bull uses humor and play to create a razzle-dazzle cast of sculptures, costumes, and paintings that reflect on and examine feminism, femininity, fertility and environmental concerns. Bull received her MFA in Drawing and Painting from the University of Georgia in 2013. She is a recipient of the Willson Center for the Arts research grant for her thesis work Lady Beasts: An Investigation of Womanliness. Solo exhibitions include, Mother, Lover, Sister, Queen at the University of North Georgia’s Bob Owens Gallery, Party Island at the Biggin Gallery, Auburn University and most recently, Rhinestone Cowgirls in WhiteSpec, Atlanta. She has exhibited in group shows in Atlanta with Whitespace, Camayuhs, Hathaway Gallery, Doppler Project, Mint Gallery, Mammal Gallery and at the airport in Terminal E. Regionally, she has shown work at the Zuckerman Museum of Art at Kennesaw State University, The Albany Museum of Art, Border Patrol in Portland, ME, the COOP Gallery in Nashville and all over Athens, GA. She is a Vermont Studio School Fellow, attended a two-month residency at the Bernheim Arboretum in Louisville, KY and was an Atlanta Contemporary Art Center Studio Artist in Residence from 2015 - 2018. She was featured in and on the cover of the 219th edition of Ambit Magazine, London. She currently lives in Athens and teaches at the University of Georgia.