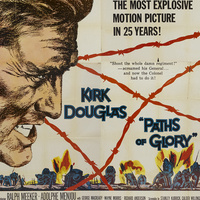 “For Home and Country” World War I Film Series: "Paths of Glory"

Stanley Kubrick’s "Paths of Glory" starts Kirk Douglas stars as a World War I French colonel who goes head-to-head with the army’s ruthless top brass when his men are accused of cowardice after being unable to carry out an impossible mission. (1957, NR, 88 min.) Presented in conjunction with For Home and Country: World War I Posters from the Collection of Murray and Ann Blum. Sponsored by UGA Parents Leadership Council.