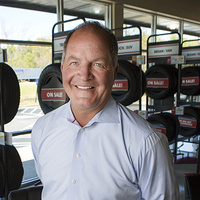 Treadmaxx Tire has one call center in Atlanta  and 14 distribution centers in seven states. Treadmaxx Tire has successfully built six homes for Habitat for Humanity and sponsored family fun days for patients at Children’s Healthcare of Atlanta.  One of the most important basic values of Treadmaxx Tire is the value of giving back to the community. Kauffman Tire was named the large family owned business of the year in Georgia for 2011 by Cox Family Enterprises of Kennesaw State University.

Mark is active on several boards including The Special Olympics of Georgia Honorary Board, Emory Winship Board of Advisors, UGA Terry College Deans Advisory Council, and Children’s Healthcare of Atlanta Systems Board.