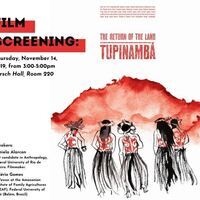 Film screening: "Tupinambá - The Return of the Land"

"Tupinambá: The Return of the Land" is a documentary film that hones in on the Tupinambá’s ongoing struggle to attain official recognition of their ancestral territory in what is now southern Bahia, Brazil.

Composed of archival footage and testimony from the Tupinambá de Olivença Indigenous Territory, the film tells the story of Tupinambá dispossession and resistance – a journey that is inextricably linked to the advance of Brazil’s agricultural frontier at the end of the 19th century, the rise of the cocoa colonels and the recognition of indigenous territorial rights by Brazil’s 1988 Constitution.

In 2010, Chief Babau (Rosivaldo Ferreira da Silva) was imprisoned in a maximum-security penitentiary for five months. During that same year, another leader, along with her baby, was imprisoned for two months. In 2009, federal police officers tortured five people with electric shocks and, in 2011, an Indigenous man had his leg amputated after being targeted by a plainclothes officer.

In 2014, a military base was installed in Tupinambá territory. About 500 army soldiers were moved to the area. Since then, the Tupinambá people have reported being subjected to threats and acts of violence carried out by law enforcement officials. Furthermore, the Tupinambá have been subjected to repeated acts of violence from farmers and others opposed to the demarcation (recognition) of their lands. Several cases have been recorded since August 2013.

Despite the horrendous record of abuse, the Tupinambá remain committed to the path of their ancestors. For the sake of future generations, they will continue to pressure the Brazilian state to fulfill its constitutional duty by recognizing their most basic right: their right to land.