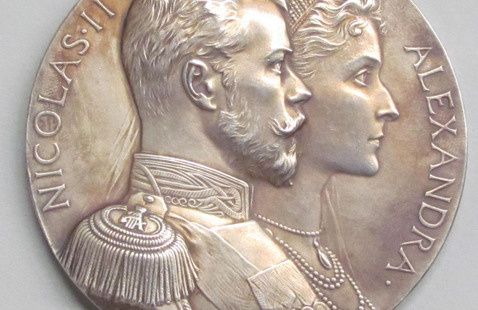 http://georgiamuseum.org/art/exhibitions/upcoming/reluctant-autocrat-and-eager-father-tsar-nicholas-ii
View map Free Event
Add to calendar
Save to Google Calendar Save to iCal Save to Outlook

This exhibition focuses on the reigns of the last two Romanov rulers: Alexander III (1881–1894) and his son and successor Nicholas II (1894–1917). It marks three closely linked anniversaries: the centenaries of the Bolshevik Revolution, the execution of the last Russian emperor and his family and the end of World War I. In accordance with the political ideology of the Byzantine Empire, the tsars of Russia were invested with divine power to rule as Christ’s representatives on earth. Nicholas II served dutifully, yet reluctantly, and his actions contributed to the demise of the Russian Empire. At the same time, the emperor was a model family man, very much like his father. This exhibition draws attention to the incongruity of divinely inspired autocracy and modern life while highlighting human fragility against the mighty flow of history.

It includes several delicate textile objects, among them an officer’s parade uniform made for Nicholas II; the official costume of the Lord Chamberlain at the Imperial Court of Saint Petersburg, which most likely belonged to Prince Alexander Sergeevich Dolgorukov (1841–1912); and two children's costumes, a Cossack robe (chokha/cherkeska) and a gold-embroidered Caucasian outfit for a boy. Both of the children's costumes date to the early 20th century and must have belonged either to the Tsarevich Alexei (1904–1918, the last Romanov heir to the throne) or another young Romanov grand duke. Directly related to the Tsarevich himself is a silk blanket with embroidery presented to the infant Alexei by the commanders of the Cossack Army, whose supreme hetman he was from the moment of his birth. The exhibition will include also two gold-embroidered hussar sabretaches (flat satchels with long strips worn by cavalry officers), a silk hand-painted military standard, silver-gilt and silk epaulettes and silk brocade shoulder straps, as well as icons dating to the late 19th and early 20th century, several of them presented to and used by the family of the tsar, original photographic prints from Nicholas II's coronation and Russian imperial-era porcelain.

This exhibition is sponsored by the W. Newton Morris Charitable Foundation and the Friends of the Georgia Museum of Art.