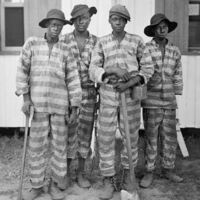 Exhibition: The New South and The New Slavery: Convict Labor in Georgia

The Thirteenth Amendment abolished slavery in the United States, and outlawed forced labor except for use as punishment for a crime. Georgia, along with other southern states, exploited this legal loophole to solve the labor shortage that plagued the region in the post-war period. In 1866, the Georgia General Assembly legalized the leasing of prisoners for profit to private individuals and companies, creating a new system that retained the exploitation and brutality of slavery: convict leasing.

This exhibit explores the forced labor of prisoners in Georgia from the start of the convict lease system in 1868 until the abolition of the chain gang in 1945. Penitentiary reports, lease contracts, correspondence, newspaper articles, and more expose the motivations of the businessmen and politicians who created these systems and illuminate the lives of prisoners who toiled within them. Cultural productions, including autobiography, fiction, film, and songs, reveal the many ways prison labor has come to be represented in American memory.