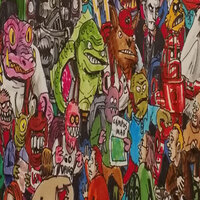 Exhibition: The Monsters Are Due on Broad Street: Patrick Dean

Cartoonist Patrick Dean drew a weekly strip for Athens’ alternative newsweekly, Flagpole magazine, from 1997 to 2006, as well as many covers. Influenced by Jack Davis, George Grosz, Tomi Ungerer and early Mad Magazine, he populates his scenes with a wide variety of characters interacting with one another, capturing a broad range of Athens’ population. Jokes abound, and monsters are humanized as much as people are monsterfied. In 2018, Dean was diagnosed with amyotrophic lateral sclerosis (ALS), also known as motor neurone disease (MND) or Lou Gehrig’s disease. He continues to draw, despite his increasing difficulties doing so. This small retrospective begins with his student work at UGA, from which he graduated in 1998, and ends with his recent comics about illness and mortality.