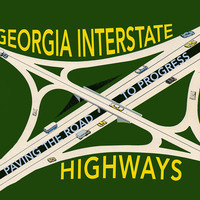 The modern interstate highway system—a nationwide network of high-speed, controlled-access freeways—has played an essential role in restructuring the American landscape over the course of almost seven decades. This exhibition explores the origins and impact of these roads with a particular focus on the political compromises and fiscal policies that made them possible. The exhibition also considers how the construction of interstate highways across the nation and Georgia forever altered the state’s economy, politics, and culture since the middle of the 20th century.