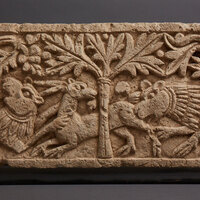 This extraordinary assembly of objects dating from the 3rd to the 8th century CE belongs to Emanuel and Anna Nadler of New York City and Palm Beach. The Nadler family has long been one of the most important collectors of Coptic art. Emanuel’s father, Maurice Nadler (1885–1941), a prominent industrialist from Alexandria who made art acquisitions in Egypt and Germany, originally put this collection together between 1920 and 1941. Coptic art was made by and for native Egyptians, Greeks and Romans who favored both classical pagan and Christian themes.

On display will be 56 objects, among them a marble Corinthian capital with crosses and eagles from the Monastery of St. Menas; two sections of large tapestries used as wall hangings in churches or homes; small textile fragments which originally embellished tunics used in burials; 19 works of sculpture derived from funerary sites; and miniature bone carvings that were embedded into pieces of furniture, bridal caskets and small chests for storing jewelry and other precious items.

“Modernism Foretold” draws attention to the history of the collection and to changing perceptions of late antique art from Egypt. In 1966, 116 late antique works from the collection were introduced to American audiences in an exhibition titled “Six Centuries of Coptic Art,” mounted at the Gallery of Modern Art, New York City. That exhibition presented the work as viewed through a specific modernist prism, reflecting the idea that non-illusionistic art expressed intellectual and spiritual substance. Throughout the 1960s, the collection became an integral part of a campaign of cultural diplomacy during a pivotal period in the Cold War, following the nationalization of the Suez Canal. The Nadlers’ works played a salient role in a campaign in which prominent philanthropists joined UNESCO’s efforts to save the ancient Egyptian temples at Abu Simbel, the site of which was to be submerged by the Aswan High Dam.