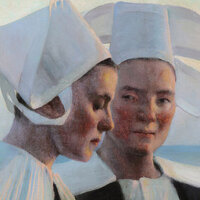 This exhibition marks the first in a series of installations in which the Georgia Museum of Art’s curators will create focused, innovative conversations around a single work of art from the permanent collection. The series brings these familiar works to life by placing them in dialogue with works of art by influential peers, related sketches and studies or even objects from later periods.

The inaugural presentation of “In Dialogue” highlights Cecilia Beaux’s “Twilight Confidences” — an important recent addition to the museum’s collection and the artist’s first major exercise in plein-air painting, which she produced during a summer in the French seaside village of Concarneau. In the exhibition, “Twilight Confidences” appears alongside three studies for the picture in various media and techniques (all on loan from the Pennsylvania Academy of the Fine Arts), in order to show the rigorous yet experimental process Beaux followed in producing this important picture. Although Beaux would not paint out-of-doors again after leaving France in 1889, the lessons of “Twilight Confidences” — light and color as both constructive and expressive elements in painting, and white as a container of all colors — would inform her figure paintings for decades afterward.