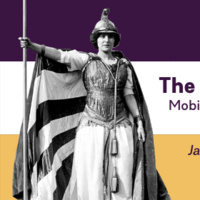 Exhibition: The Strategies of Suffrage: Mobilizing a Nation for Women's Rights

In 1848, more than 300 attendees gathered in Seneca Falls, New York to discuss women’s rights. In the decades that followed, suffragists gathered, discussed, spoke, wrote, performed, paraded, and protested to give American women the right to vote. They waged a determined battle for greater agency, one that united women across barriers of race and class while also revealing social tensions and racial prejudices that persisted in society. The University of Georgia’s Hargrett Rare Book and Manuscript Library will pay homage to the centennial anniversary of women’s suffrage this spring with an exhibition titled "The Strategies for Suffrage: Mobilizing a Nation for Women’s Rights" through Dec. 18, 2020. The Special Collections Exhibit Galleries are open Monday through Friday from 8 a.m. to 5 p.m. and Saturday from 1-5 p.m., excluding home football games.

"The Strategies of Suffrage" exhibition explores the women’s suffrage movement from 1848 to 1920. It focuses on the visual and verbal appeals activists used to promote their message to the public. The exhibit, curated by Sidonia Serafini, a doctoral student in UGA’s Department of English in the Franklin College of Arts and Sciences, explores the nearly century-long story of how women secured enfranchisement and campaigned for women’s civil rights in the United States. The exhibit features newspapers, magazines, books, and pamphlets that demonstrate the ways in which women harnessed the power of print culture as an instrument of agency. Photographs, postcards, play scripts, and other memorabilia show the manner activists achieved visibility in the public sphere. The display recreates the visual culture that propelled women’s rights to the forefront of the national consciousness and led to the adoption of the 19th Amendment to the Constitution in 1920.

This exhibition was made possible with the collections of and generous support from the Lucy Hargrett Draper Center and Archives for the Study of the Rights of Women in History and Law.