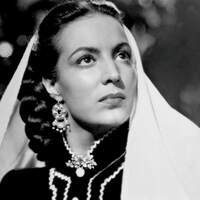 Enamorada (A Woman in Love, Emilio Fernández, 1946), a riff on Shakespeare's Taming of the Shrew set during the Mexican Revolution, returns to the big screen in a newly restored version. Chronicling the romance between a general and a spirited upperclass woman, the film is considered one of the classic Mexican cinema's finest. Dr. Jacqueline Ávila (University of Tennessee - Knoxville), author of Cinesonidos: Film Music and National Identity in Mexico's Época de Oro, will introduce the film.  The book will be available for sale beginning at 7:30 p.m.

Restored by UCLA Film & Television Archive and The Film Foundation's World Cinema Project in collaboration with Fundación Televisa and Filmoteca de la UNAM. Restoration funded by the Material World Charitable Foundation. Screening sponsored by the Department of Theatre and Film Studies and the Department of Romance Languages.