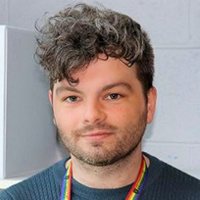 "The Influence of Within-Host Parasite Interactions Varies with Spatial Scale," Shaun Keegan, doctoral student in the University of Liverpool's Department for Evolution, Ecology and Behaviour

Abstract: Concurrent infection by multiple parasite species is the norm in wildlife. There are many examples across multiple host and parasite taxa of parasites interacting either facilitatively or antagonistically within hosts. These interactions can have different effects at within host and whole population scales. However, the spatial influence of those interactions, through their impact on parasite transmission, is unknown.

We developed an approach to determine what, if any, effect these interactions had on parasite infection risk at a range of spatial scales, between the individual and the whole population. Using a longitudinal, mark-recapture dataset of wild wood mice, we determined how the infection status of various parasite species varied with the prevalence of infection with other potentially interacting parasites, at increasing neighbourhood sizes around each individual. This method was applied to environmentally transmitted parasites (the nematode, Heligmosomoides polygyrus, and the protozoa, Eimeria hungaryensis and E. apionodes), flea-borne parasites (the bacteria Bartonella spp. and the protozoa Trypanosoma spp.) and the close contact transmitted Wood Mouse Herpes Virus.

We found interactions between parasites across all taxa, some negative (i.e., individual infection risk with one parasite species declined with increasing prevalence of another species in the neighbourhood), and some positive. Overall this approach identified parasite interactions that have not been otherwise detected.

During my time at UGA, I will be adapting this approach for the African buffalo, and its macro and micro parasites, specifically the known nematode – Mycobacterium bovis interaction. Successful use of the method, to accommodate social network data as a proxy for spatially explicit data, would highlight its versatility for a range of disease systems.

Classes and Workshops, Lectures and Discussions