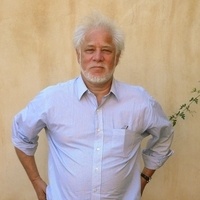 The Jane and Harry Willson Center for Humanities and Arts will welcome author Michael Ondaatje as the 2019-2020 Delta Visiting Chair for Global Understanding. Ondaatje, whose 1992 novel The English Patient was awarded the “Golden Booker” prize in 2018 as the best English-language novel of the past 50 years, will visit UGA and Athens Oct. 24-25 for a slate of public events and small-scale interactions with college and high-school students.

Ondaatje’s main public event will be a reading and conversation at 4 p.m. Thursday, Oct. 24, in the UGA Chapel, followed by a meet-and-greet reception on the lawn outside the Chapel. On Friday, Oct. 25, Ondaatje will attend an 8 p.m. public reception and book signing at Ciné. Books will be offered for sale at the event by Avid Bookshop. Both events are free and open to the public. During his two-day visit, Ondaatje will also meet with students in classes at both UGA and Clarke Central High School.

Born in Sri Lanka, Ondaatje spent his late childhood in England and has lived in Canada since 1962. He is best known for his novels, including Coming Through Slaughter (1976), In the Skin of a Lion (1987), Anil’s Ghost (2000), Divisadero (2007), and most recently Warlight (2018), which was longlisted for the Man Booker Prize.

The English Patient won the Man Booker, awarded each year for the best novel written in English and published in the United Kingdom, then was chosen for the Golden Booker from among the first 50 years of winners of the prize. The book is a kaleidoscopic tale of four characters ensconced in a bombed-out Italian villa near the end of World War II, its perspective constantly shifting through their separate and shared pasts and present in a densely layered exploration of the subjectiveness of identity and the personal resonance of history. A 1996 film adaptation, directed by Anthony Minghella and starring Juliette Binoche, Ralph Fiennes, Willem Dafoe, Naveen Andrews, and Kristen Scott Thomas, won nine Academy Awards.

The Willson Center will present a free screening of The English Patient at 7:30 p.m. Wednesday, Oct. 16, at Ciné.

In addition to his novels, Ondaatje has published numerous collections of poetry including There’s a Trick With a Knife I’m Learning To Do, The Cinnamon Peeler, and Handwriting, as well as a memoir of his childhood, a book of interviews with the film editor Walter Murch, and a critical analysis of the prose and poetry of Leonard Cohen. He also directed a series of documentary films in the 1970s.

The Delta Visiting Chair for Global Understanding, established by the Willson Center through the support of The Delta Air Lines Foundation, hosts outstanding global scholars, leading creative thinkers, artists, and intellectuals who engage with audiences on and off the UGA campus through lectures, seminars, discussions, and other community interactions. The Delta Chair program aims to foster conversations that engage with global perspectives through the humanities and arts.

The chair is founded upon the legacy of the Delta Prize for Global Understanding, which from 1997-2011 was presented to individuals – including Nelson Mandela, Mikhail Gorbachev, Ted Turner, Desmond Tutu, and Jimmy and Rosalyn Carter – whose initiatives promoted world peace by advancing understanding and cooperation among cultures and nations.