Closing Event: An Education in Georgia: Looking toward the Future

By University of Georgia Press, Willson Center for Humanities and Arts
Department of Educational Theory and Practice 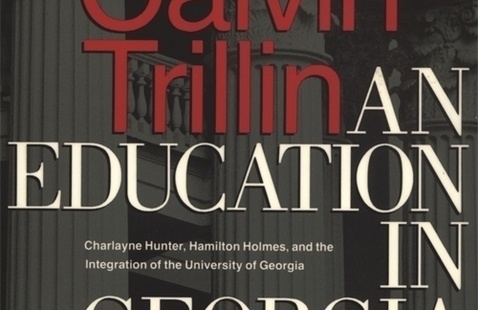 To wrap up the 60th anniversary desegregation campus-wide reading event for An Education in Georgia: Charlayne Hunter, Hamilton Holmes, and the Integration of the University of Georgia (UGA Press), Mary Frances Early, music educator, writer, and the first African-American student to graduate from UGA, and Phaidra Buchanan, current undergraduate majoring in social studies education and minoring in German, Foundation Fellow, and UGA's first African-American Rhodes Scholar (2021), will be in conversation with moderator Cynthia Dillard, Mary Frances Early Endowed Professor of Teacher Education at UGA, to discuss the past, present, and future of a desegregated UGA.

This is a free virtual event open to the UGA community and the public at large. Registration is required to attend.

This event is sponsored by the University of Georgia Press, the New Georgia Encyclopedia, the Grady College of Journalism and Mass Communication, and the Mary Frances Early College of Education. This event is also presented in partnership with the Willson Center for Humanities and Arts as part of the 2021 Global Georgia Initiative public events series. Support for this event was provided by Elizabeth and Sheffield Hale.

Mary Frances Early is a retired music educator and music textbook writer and was the first African American student to graduate from the University of Georgia in 1962, following the footsteps of Charlayne Hunter and Hamilton Holmes, who enrolled shortly before her in 1961. After retiring from public school teaching in 1994, she went on to teach at Morehouse College and Spelman College; she later served as chair at Clark Atlanta University's music department. In 2018, she was awarded UGA's President's Medal, and in the following year, UGA's College of Education was named in her honor. She continues to be an advocate for education and an active member within the UGA community.

Phaidra Buchanan is a senior at UGA studying Social Studies Education and German. Phaidra helped examine the university’s role in the institution of slavery and studied the lived experiences of enslaved people connected to the university as a member of the History of Slavery at UGA research team. She also volunteers with U-Lead, an organization working to ensure equal access to higher education for students of immigrant families. Phaidra plans a career as a teacher “who fosters criticality, compassion, and joy,” and as an advocate for policies that empower students and communities.

Cynthia Dillard is the first Mary Frances Early Endowed Professor of Teacher Education at UGA and is a prolifically published scholar in fields such as multicultural education, black feminism, and diversity. She graduated with her B.A. in Marketing Education from Central Washington University and with her M.S. Ed in Vocational  Technical Education and Ph.D. Multicultural Education and Educational Leadership from Washington State University. She has received numerous awards, such as the Critics' Choice Book Award for "Engaging Culture, Race and Spirituality: New Visions" in 2014 and Distinguished Contributions to Gender Equity in Educational Research in 2012. She continues to teach and inspire the next generation of educators and continues her scholarship and research.

University of Georgia Press, Willson Center for Humanities and Arts

Department of Educational Theory and Practice